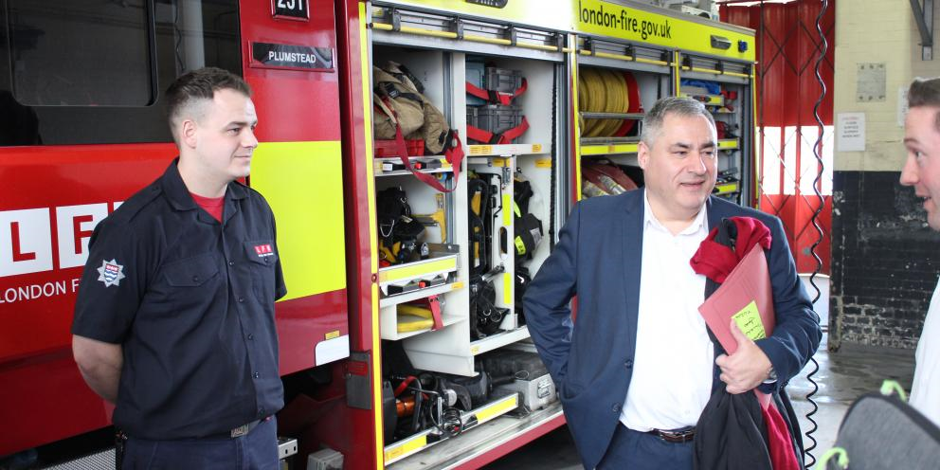 During a tour of the station, Mr Duvall held discussions with the delegation on the implications of the latest report from Her Majesty’s Inspectorate Constabulary of Fire and Rescue Services (HMICFRS) into the performance of LFB. Amongst the group, there was a consensus around improving the training processes and culture within the Brigade on the back of the report’s publication in December.

The London Fire Commissioner, Andy Roe, spoke of the efforts being undertaken to ensure that all staff are engaged in the transformation of the Brigade, and outlined new plans for improved training at fire stations and better assurance of incident command skills for LFB officers.

In addition, the London Fire Commissioner underlined the need for urgent improvements and repairs to be made across the LFB’s estate, including Plumstead Station. At the end of last year, the Deputy Mayor for Fire and Resilience approved over £3 million for asset replacement works to begin over the next financial year.

The need for increased mental health and counselling support for LFB staff was also highlighted during the visit. An LFB Quarterly Performance report, published last year, revealed that stress, anxiety and depression (SAD) was the main reason behind sickness absence amongst its staff between September 2018 and September 2019.

“After the tragic Grenfell Tower fire which led to a terrible loss of life, it is important that we remember the crucial work of our firefighters who routinely run towards danger to keep Londoners safe.

“Since Grenfell, the Brigade have brought in new equipment, training and policies to do their part to ensure such a tragedy can never happen again.

“From discussing mental health support to training provision, it was positive to visit Plumstead Fire Station to hear from staff of all ranks on the issues they feel need to be addressed going forward.